skip to main | skip to sidebar

As you can see, I haven't posted here in a while. The main reason is that I just don't have the time.

Not only do I have a day job, but I'm still doing stand-up comedy and writing, I have a six month old baby, two dogs, my own animal rescue, and, last but not least, a wife.

If that isn't enough, I've started to become active in the animal rescue community, pushing for reform in the ongoing nightmare that is the NYC shelter system. You may've seen this video of me at an ACC (Animal Care and Control - They run the NYC shelters...into the ground, I may add)...

Yeah, I'm a lil angry at the current sitch...

Thanks all for reading these posts. I may come back to this (who knows), but for now, if you wanna read what I'm up to, "friend" me on Facebook here, or visit the blog of my animal rescue here, where I will be posting every few days.

Harris Bloom
www.stewietotherescue.org
www.harrisbloom.com
Posted by Harris at 9:32 AM No comments:

A fellow comic wrote his e-mail list about some non-comedy related gig in Time Square that would pay $450 for four partial days of work. Due to a desire to make some easy, quick coin, I followed his link to sign up.

Though the coin was quick, I wouldn't say it was easy (I shoulda been scared when the ad said, "We will supply the jumpsuit")

The job was to, wearing the aforementioned jumpsuit (blue, with "Hyundai" splashed on it), "clean" Times Square. I put "clean" in quotes as we were given brooms, feather dusters, squeegies, and portable vacuums and were told to clean the air in groups of six. Basically, pretend we were cleaning. Thanksfully, I didn't run into anyone I knew, which is more than I can say for an acting teacher I was working with, who ran into a student of his (ouch!).

Try pretending to vacuum the air for five hours...not as much fun as you'd think. It gets old after about five minutes. Especially on the corners where the sun was beating down on us (We spent as much time on corners in the shade, waiting until the next group came by to kick us to the next one)

1 - While standing at a corner and pretending to dust the air, I smiled at an older Irish guy, also waiting. He looked at what I was doing and asked, "What are ya, stupid?"

2 - This guy asks me to keep doing what I was doing (brooming the air) while he called over his six or seven year old son. The father pointed at me and said, "This is what happens when you dont go to college."

I coulda explained to them that I did graduate college and make a decent living, and how I was only doing this to make extra cash for an apartment that my wife and I are saving up to buy (in the year 2037), but I figured, eh, let him have his life lesson. Actually, it woulda been great if I just told them, "Actually, I did go to college."

Funny he mentioned college though, as the job kinda made me think of my dad. He didn't go to college, and spent his life doing crappy jobs to provide for his family. I often think about what it must have been like for him, doing something I know he disliked for a living, but needed to do.

For one weekend, I walked in his shoes. 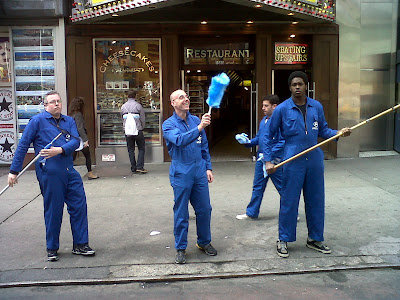 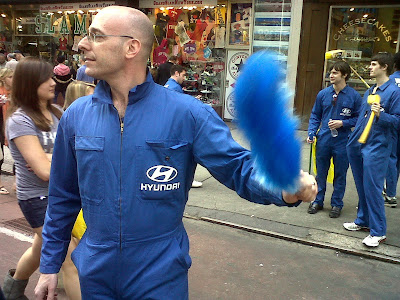 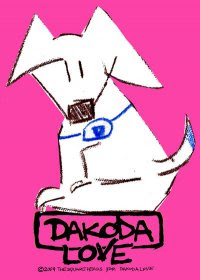 I'm gonna keep this short. I've decided to follow a passion of mine by joining the Board of Directors of DakodaLove Pet Project (Inc. pending). I will also be Treasurer (God help us).

DakodaLove specializes in pit bulls and other "bully breeds," not because we want to, but because we have to. Hundreds are killed daily at animal shelters in the tri-state area due to over-breeding (we know why) and misinformation (google "the nanny dog"). We will rest when that number is zero.

If you have any interest in our mission, please join our fan page on Facebook HERE .

Our website will be operational in the coming weeks.

Our first fundraiser will be at Tommy's Tavern on March 20th, for an evening of punk/alt bands (cover is ten bucks, with all proceeds going to DakodaLove). Alas, I have a gig that night and won't be able to make it.

The next fundraiser will be a comedy night at Gotham Comedy Club on April 12th at 8 PM. We will feature comics you've seen on Comedy Central, NBC, MTV, PBS (you get the idea). I will be emceeing the event, which will cost twenty-five bucks (with a two-drink minimum).

I hope some of you can join us.

So, at long last, Austin, the dude who runs (or, at least, used to run) our favorite trivia night in a bar (as opposed to , I suppose, in a barn), started a new one (the bar closed...RIP Conker Hill).

Josie, myself and the rest of our 5 person team made it to the bar in spite of cold temps and the threat of (more) snow. Not many others did. In fact, so few people were in attendance that we decided to split up our all-star squad to make it interesting. The two men vs. the three women.

As at Conker, the best team name won a round of shots. Out of the goodness of our hearts, we gave the women the team name that Vic came up with when we thought we were gonna be one team - Kevin Smith's Next Movie? MallFats.

Of course, we only did so as I thought of one that I knew that Austin would prefer - Four Days Till Pitchers and Catchers And The Mets Are Already Mathematically Eliminated - thereby winning us the round of shots (we gallantly made sure the ladies got one too)

Not unexpectedly, after the first three rounds we were dead even, well ahead of the other two or three teams that were playing. The fourth round was "Fashion" and again, not unexpectedly, we fell behind by two points. Uh oh. After losing to the women a few weeks ago at drinking, I knew I was in for it if we lost this too.

The fifth round was "Stuff You Should Know" (no, it wasn't about an Alanis Morrisette breakup). Just crap we "should" know, like how many licks did the owl take to get to the center of a tootsie pop (three).

Upon hearing that, I laughed for a good minute and a half.

We won by one.

If You Think He Looked Scary Before...

When I'm walking Kilo, I get all kinds of reactions, from people asking me if he's a pit bull to people literally crossing the street to avoid him (at least I assume it's him they're avoiding...hmmm).

Kilo got into a little tussle at the dog run yesterday, leaving some with some bloody bite marks on his face.***

I'd love to know what people were thinking while I was taking him home, a pit bull with dried blood around his mouth.

*** It was the first fight he'd been in in the seven months I've had him. My lil terrier used to get into one a week.
Posted by Harris at 1:41 PM No comments:

If you didn't already know that people are sheep, last week was apparently "Doppleganger Week" at Facebook, where you were sposed to put up a pic of someone you think you look like (If I did it, it woulda been a pic of this dude I saw sitting at a table in Artie's Deli a few weeks ago - it was uncanny...seriously).

ANYWAY, I reminded (again) how people are sheep watching the Syracuse/Cincinnati college basketball game yesterday. Whenever the camera panned through the crowd, the Cincinnati student section all mugged by yelling at the camera while sticking their index finger in the air.

Leaving work on Friday, I shared an elevator down with a co-worker.

"What are your weekend plans?" he asked.

"I gotta show tonight and tomorrow night, and just watching the Super Bowl Sunday. How about you?"

"Same thing...except for the shows."

"Sooooo, you're watching the Super Bowl."

Harris
Posted by Harris at 12:07 AM No comments:

I'm a comedian, a writer, and an accountant. Guess which one I'd like to quit.

Not only do I perform at comedy clubs but am experienced at helping to organize and perform at fundraisers and benefits, so if you would like to schedule one, and can use a comic to help, feel free to e-mail me at harrisbloom@yahoo.com. Thanks!

If Bored, Write Me, Cause I Am